The origins of the gibson girl 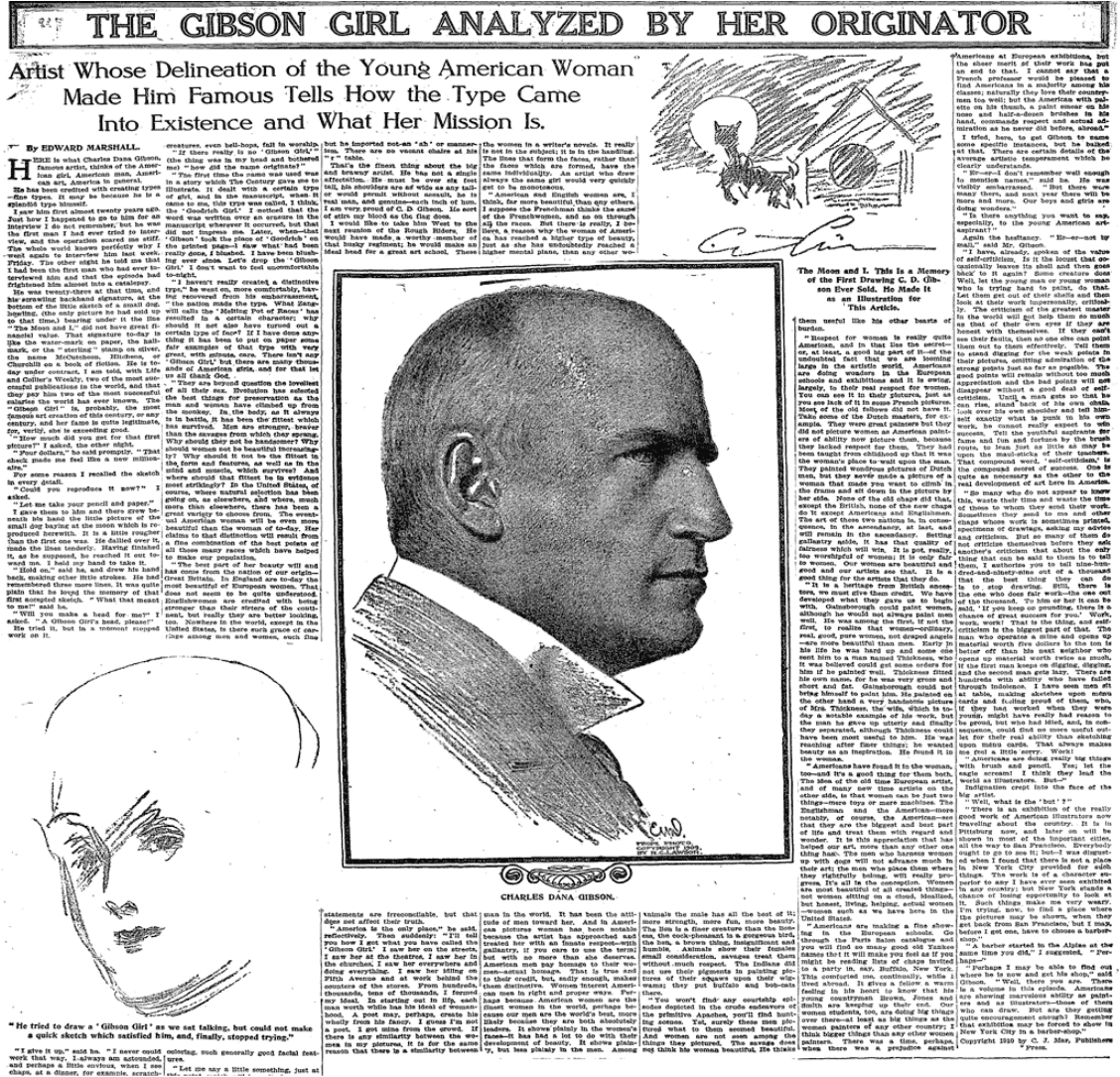 In an interview between a journalist and Charles Gibson, the creator of the so-called "Gibson Girl", Charles Gibson explains the accidental, almost serendipitous manufacturing of the New Woman over whom everyone came to obsess.

An excerpt from the article:

“Then the stories of the models,” I said eagerly, “the models for the Gibson girl, are–”

He sighed wearily. “Please don’t,” he said. “The ‘Gibson Girl’ does not exist. She has been as the grains of sand in number. I imagine that folks must recognize ‘United States’ in her, and that it’s that which makes them think she’s all, or nearly all, the same. She isn’t really.”

His mind turned to [another topic, which he began to speak about for a bit.]

“If there really is no ‘Gibson Girl,'” (the thing was in my head and bothered me) “how did the name originate?”

“The first time the name was used was in a story which The Century gave me to illustrate. It dealt with a certain type of girl, and in the manuscript, when it came to me, this type was called, I think, the ‘Goodrich Girl.’ I noticed that the word was written over an erasure in the manuscript wherever it occurred, but that did not impress me. Later, when — that ‘Gibson’ took the place of ‘Goodrich’ on the printed page — I saw what had been really done, I blushed. I have been blushing ever since. Let’s drop the ‘Gibson Girl.’ I don’t want to feel uncomfortable tonight.

“I haven’t really created a distinctive type,” he went on, more comfortably, having recovered from his embarrassment, “the nation made the type. What Zangwill c﻿alls the ‘Melting Pot of Races’ has resulted in a certain character; why should it not also have turned out a certain type of face? If I have done anything it has been to put on paper some fair examples of that type with very great, with minute, care. There isn’t any ‘Gibson Girl,’ but there are many thousands of American girls, and for that let us all thank God."  11

As humans are often inclined to do, Americans of the 19th century perceived a shift in societal trends, quickly grasped onto it, and slightly misinterpreted it along the way. In a constant desire to stay contemporary and fashionable, Americans perceived  this new depiction of femininity as the archetype for feminine beauty. Women and men alike mistook Gibson's personal feminine ideal for the American feminine ideal. Women began attempting to imitate both the physical appearance and bold disposition they thought that Gibson's illustration was meant to have possessed, while men began to alter their own perceptions of feminine beauty of fit those qualities of the Gibson Girl. Ironically enough, as Gibson himself explained, he never intended to strike such a fundamental chord in the core of American culture. He tried to emphasize time and time again in the interview shown above that he did not promote or encourage the one-dimensional, limited interpretation of beauty. He advocated an appreciation and admiration of every American woman; he enforced the idea that Americans should celebrate women's differences rather than recognize only one route to beauty. Alas, once the illustration made its debut on some of the most famous and widely-known magazines, Gibson's intentions were ignored, while his creation was glamorized. 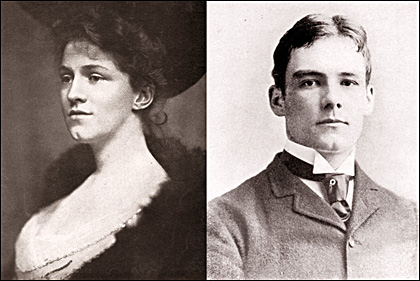 12
Gibson's wife (left), Irene Langhorne, and close friend (right), Richard Harding Davis, served as direct inspiration for his drawings. Perhaps two of the most influential people in the creation of Charles Gibson's famous character, they remained complete strangers to the society that quickly came to unknowingly idolize them. Thus, Gibson's original drawing reflects a personal and individualized perception of feminine beauty, one that encompasses all the qualities that he cherished and admired in his own wife, rather than qualities he thought every man should seek. His friend, whose drawings also made it into popular and well-respected magazines, became to symbolize the ideal male of the era, one that would not only accompany the New Woman, but underscore her importance. He was to be "the handsome and often unwitting victim of the Gibson Girl's charms." 13